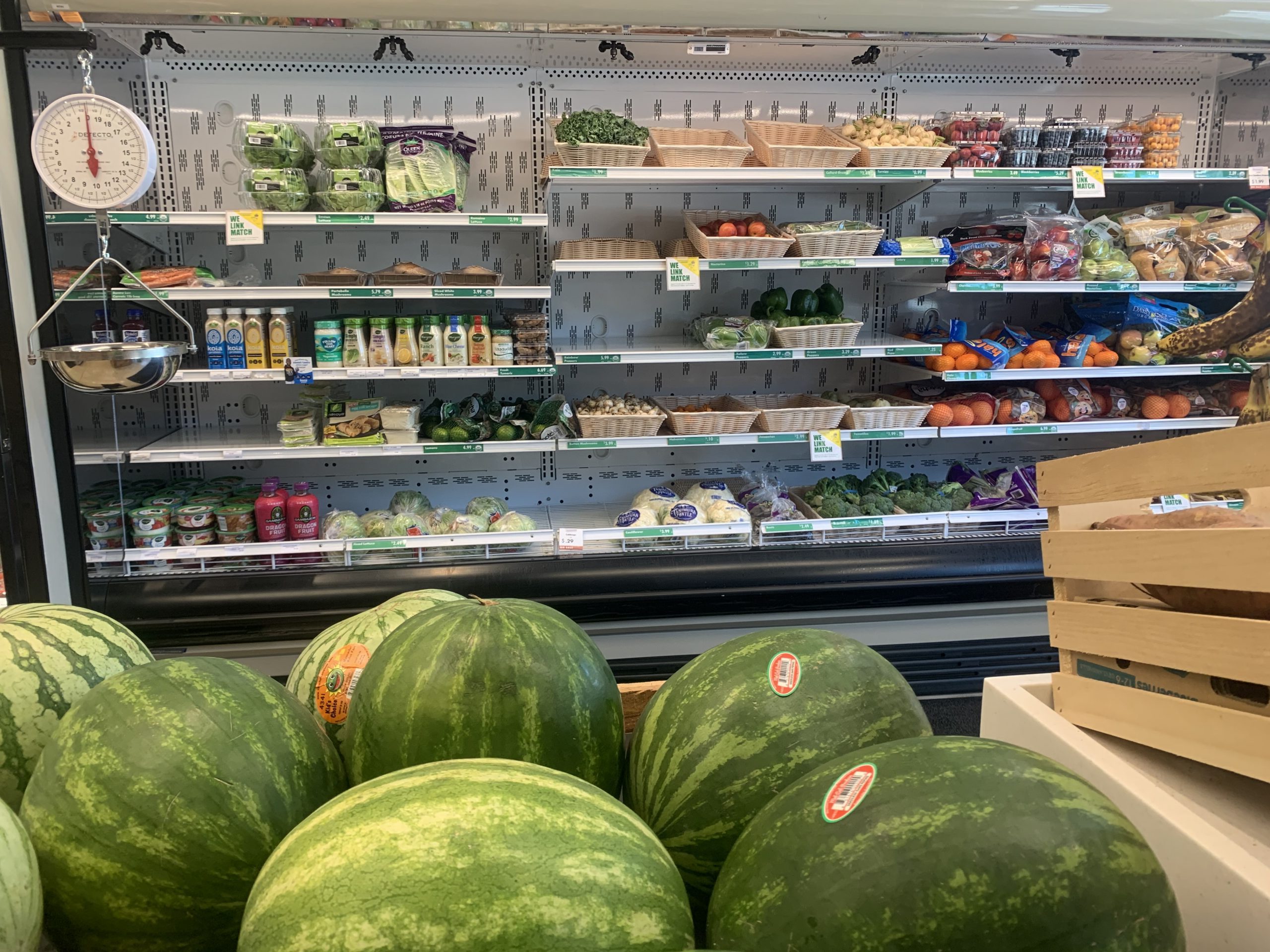 The Go Green Fresh Community Market in Chicago’s Englewood is an oasis. With its earthy-colored signs and stalls stacked with leafy greens, the local grocery store sits at the intersection of 63rd and Racine – right in the heart of a food desert, where locals have little or no access to fresh produce.

Food deserts, according to the USDA, are entirely man-made urban areas with a poverty rate of at least 20% and where at least a third of the population lives more than a mile from a supermarket or large grocery store. In Chicago, food deserts make up the majority of South and West neighborhoods, prompting around 500 thousand residents to shop at local corner stores.

A typical corner store, however, is crammed, small, and does not carry fresh food options, explains Elliot Clay, state programs director at the Illinois Environmental Council. Results of concentrated shopping at corner stores vary from health problems – obesity, diabetes, and shorter life expectancy – to social issues, where neighborhoods do not evolve, and locals drain their own neighborhoods of income, trying to access food options elsewhere.

“Corner stores are typically the only stores residents can access without a private vehicle, “explains Sana Syed, senior director of strategic initiatives at the Inner City Muslim Association (IMAN), an organization behind Englewood’s community market. “51% of Englewood’s population does not own a car.“ This creates a 30-year life expectancy gap between Englewood – where an average resident is expected to live up to 60 years – and Streeterville, just nine miles north, where life expectancy is up to 90 years.

Despite the implication in the name, food deserts are not naturally the case for Chicago, Syed adds. Rather, they are a result of people’s decisions. One such decision is the announced closure of the Whole Foods Market, just two intersections away from Go Green. Less than six years ago, Whole Foods promised to bring more fresh food options to Englewood, yet Mayor Lori Lightfoot now insists that the corporation never made the right investment, to begin with: “Most Chicagoans are hard-pressed to pay, for example, $15 a pound for a piece of steak,” Lightfoot said. “To me, what it underscores — and I wasn’t here when this decision was made — you cannot bring investment to the community without talking to the community and making sure the investment makes sense for that community.”

Now IMAN is stepping in to fill in the gap meaningfully, trying to find the best-tailored approach for Englewood. At first, the organization worked directly with corner store owners, encouraging them to diversify the products and improve the aesthetics of the stores “But we could only preach that much,” Syed smiles.”At some point, these corner stores needed a viable model. They needed to see what their store could look like.”

Since opening its doors in March 2022, the Go Green Fresh Community Market has shown what a neighborhood market can do for local vendors and consumers alike. The market carries 40 local products owned by people of color; It also offers halal, kosher, and gluten-free options for consumers with specific diets. Pre-packaged lunch options made on the spot in the deli – a rare luxury in Englewood – are hit products that vanish from shelves in an instant.

But what’s more important, Syed says consumers finally have a local store that feels dignified to them.

“The overwhelming reaction has been of gratitude,” she says, recalling how residents would leave tips at the cash register. “ It is such a heartwarming gesture if you think of it. This is a low-income neighborhood where people barely have enough to pay bills, and yet they were leaving tips.”

A market – a model of a successful small business in Englewood also served as an important example of local success. Syed explains that IMAN made a conscious choice to start a business rather than a food pantry:

“There are some pantries [serving Englewood residents],” she said. “But it was just the lack of confidence that business operators or corporations have around the viability of business in our neighborhood.” So IMAN insisted upon fostering business development.

Just a state away from Chicago, “Max” Kaniger also saw an opportunity in corner stores strewn across Kansas City, where countries like Jackson in Missouri and Wyandotte in Kansas, parts of which classify as food deserts.

“I realized convenience stores provide a really great infrastructure that’s already in place,” he recalls. In 2017 Kanger partnered with one store on May 31st and Prospect, which allowed him to bring and install a refrigerator for fresh produce. Kaniger would deliver perishable goods for it, and the store would keep some income from the sales.

4 months of partnership and a year of analyzing its results gave way to what is now Kanbe’s Markets –  a 30,000 square-foot warehouse with six trucks going in and out, supplying 40 corner stores in the city’s Black and Brown communities with fresh goods and making sure they can store the items properly: For each store, Kanbe’s buys refrigeration, shelving, racks, and baskets. Then, it delivers fresh produce on consignment, meaning that no charges are applied to corner stores until the produce is sold. “If anything goes bad, we replace it at no cost,” Kaniger adds. All the corner stores have to do is sell the produce and the two sides share profits.

“With the consignment model, we make it easier for them to sell healthy foods,”  Kaniger says, explaining that as a supplier, Kanbe’s gets to control the quality and the price of all the food in the store. He remembers instances of severed relationships because partners inflated prices. “Just because they are the only option in a particular neighborhood doesn’t mean I want the prices to go up,” Kaniger concludes. The model also enables Kanbe’s to keep shelves stacked even if the product sells out quickly.

Kanbe’s operational area starts from the northern end of the city and spans to Independence in the south. It includes Coleman Highlands and Troost Avenue, which has historically served as a divide between the city’s East and West sides – the life expectancy in East Kansas City, where Black and Brown communities reside, is 14 years less than in areas west of Troost Avenue.

In the face of a disparity like this, Kaniger’s philosophy makes sense: at Kanbe’s, nothing goes to waste. Foodsellers donate what they aren’t going to sell, and Kanbe’s volunteers come in, sorting food in terms of quality: The best quality products go to grocery stores or organizations that prepare meal kits, lower level produce makes its way to zoos, animal shelters and the rest – to compost sites.

While a single market in Chicago or a single warehouse serving 70 stores in Kansas City can’t solve a city-wide problem, both enterprises are living examples of community members battling food deserts with their own means.

“I want to make sure that if people are having to go to a convenience store to get food, it should still be the same quality that you would expect at any grocery store,” Kaniger said about his vision.

As for IMAN, the organization hopes to turn its market into a community and cultural center that will serve as a catalyst in the revitalization of Englewood. But they can’t do the work alone, without companies distributing the goods. Syed explains that as a small non-profit, the market pays higher prices on goods than big chain enterprises like Whole Foods. “This is not just a typical grocery store; this exists within a context of food injustice and food inequity. [So distributors] have a responsibility in this neighborhood,” she says, adding with a tinge of surprise simple yet sad maxim decision-makers in the food industry often forget: “People do not have to be grateful when a grocery store opens in the community.”

Irina Matchavariani is a graduate student at the Missouri School of Journalism.

A native of the Republic of Georgia, Irina’s experience includes working with Vox Magazine and the Columbia Missourian.