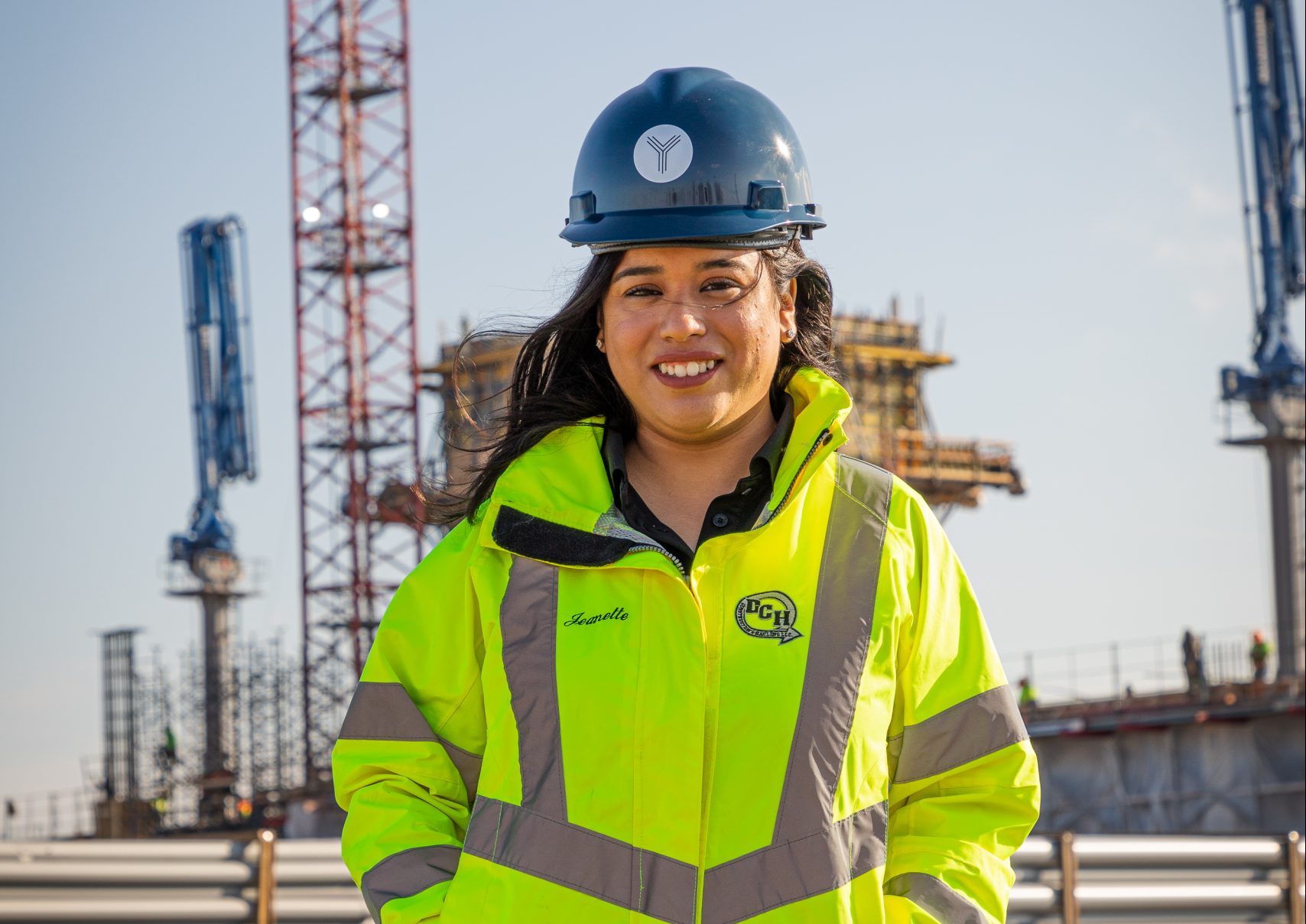 Jeanette Chavarria-Torres’ neon yellow jacket and headgear strike the eye against shades of brown and silver metals in the background. While bulldozers encircle the area and a red crane rotates in the sky, Chavarria-Torres glances to her right at the ALLY construction site, 1229 W. Concord, in Lincoln Yards and has a moment of contemplation.

Jeanette Chavarria-Torres owns Franklin Park-based DCH Construction & Hauling, which moves material to and from construction sites. DCH is currently working under its largest deal since its inception in 2014, a half-million-dollar contract with mega-developer Sterling Bay on its Lincoln Yards development.

Lincoln Yards is branded “Where Chicago Connects” and consists of over 50 acres of land bridging the Bucktown, Wicker Park, and Lincoln Park neighborhoods. The new infrastructure is projected to develop in phases over ten years and create approximately 10,000 construction jobs during the process.

Of those jobs, Sterling Bay has expressed a commitment to ensuring the inclusion of traditionally marginalized communities with about 30 percent participation from minority businesses and 10 percent from women business enterprises, according to a recent report presented before the Department of Planning & Development.

“I always say diversity is a verb, not a noun, and it has to be measurable,” said Keiana Barrett, Director of Diversity & Strategic Development at Sterling Bay.

Chavarria-Torres says she gained the attention of Sterling Bay through networking and maintaining a relationship with Walsh Construction and the Hispanic American Construction Industry Association (HACIA), an organization that advocates for the growth of minority-owned women businesses. She says building connections is vital for anyone attempting to establish themselves in this industry.

“Definitely get connected with organizations that can help you meet the right people, networking is everything and building relationships,” she explained.

Earning a significant contract didn’t come easy to DCH Construction. However, Chavarria-Torres is honest about her journey and the struggles she faced in building her business as a 22-year-old single mother.

“I don’t come from connections. Honestly, every customer that I have, I have earned every single one of them by knocking on their door to ask for an opportunity. So I think that the hardest thing for me one, was that I was a woman, but I was also a very young woman,” she said. “I had to build my reputation.”

In her words, Chavarria-Torres used her savings to buy the “dinkiest” trailer and spent three years pitching herself to contractors before finally landing a gig with Walsh Construction. She credits her persistence and honesty to getting her foot in the door.

“I didn’t tell them I can take on the whole job, I just told them if I can get a piece of that contract, [and] perform well at my capacity, that’s all that I wanted,” she said.

This transparency established her reputation in the industry.

Success in this field meant more to Chavarria-Torres than just establishing a business. It was a redemption story.

Her involvement in the industry came at an early age. Her father also owned a trucking business but faced challenges due to his language barrier as a native Spanish speaker. She says that as a 10-year-old girl, she helped him complete his paperwork, which branched into a passion for trucking as she grew older. Her father eventually lost his business and filed for bankruptcy after a deal with a contractor fell through.

“I decided then in high school that I was one day going to open a trucking company to kind of redeem ourselves from what happened,” she said.

When she approached her father with the idea, he stressed the importance of education.

“Under one condition that he would one day help me was that I needed to come home with a 4-year degree in business and accounting,” she said.

She followed through with her promise, earning a 4-year degree in Business Administration, and a minor in Accounting from Dominican University.

She says that although her parents are not verbally expressive, she knows that they appreciate her hard work and dedication.

“I know they’re proud of me and I just want them to know that all their sacrifices and what they left behind in Mexico were worth it because it gave us a better life,” she said.

Barrett also expressed admiration of Chavarria-Torres’ journey and emphasized the importance of minority representation in all industries.

“We’re always happy to be able to collaborate with firms such as Jeanette’s that has such an inspiring story of how she’s been able to triumph and continue to move forward… I always say young people aspire to be what they see. So when they see individuals that look like them, it gives them a sense of hope and it broadens their lens to know what opportunities exist for them,” she said.

Chavarria-Torres hopes her story motivates others to pursue business ventures despite the difficulties.

She said, “I want other people to see that you can make it even though there’s a lot of obstacles. I don’t like to say obstacles, challenges, but I don’t think there’s a challenge that I have not been able to conquer. You just figure it out.”

Although there were many obstacles along the way, DCH Construction has grown from one “dinky” truck to now owning six. It has expanded its subcontracting area, allowing for collaboration with other women minority-owned businesses, and has earned a half-million-dollar contract with one of the largest real estate firms in Chicago. Chavarria-Torres hopes this experience creates a lasting relationship with Sterling Bay.

“This is my first big, private job so it’s a huge honor for me to just be part of the Lincoln Yards project and I’m very thankful for Walsh Construction and not only them, but Sterling Bay that have really opened the doors to want to see me succeed, and I know that this is just the beginning of many projects that we’ll be on together,” she said.