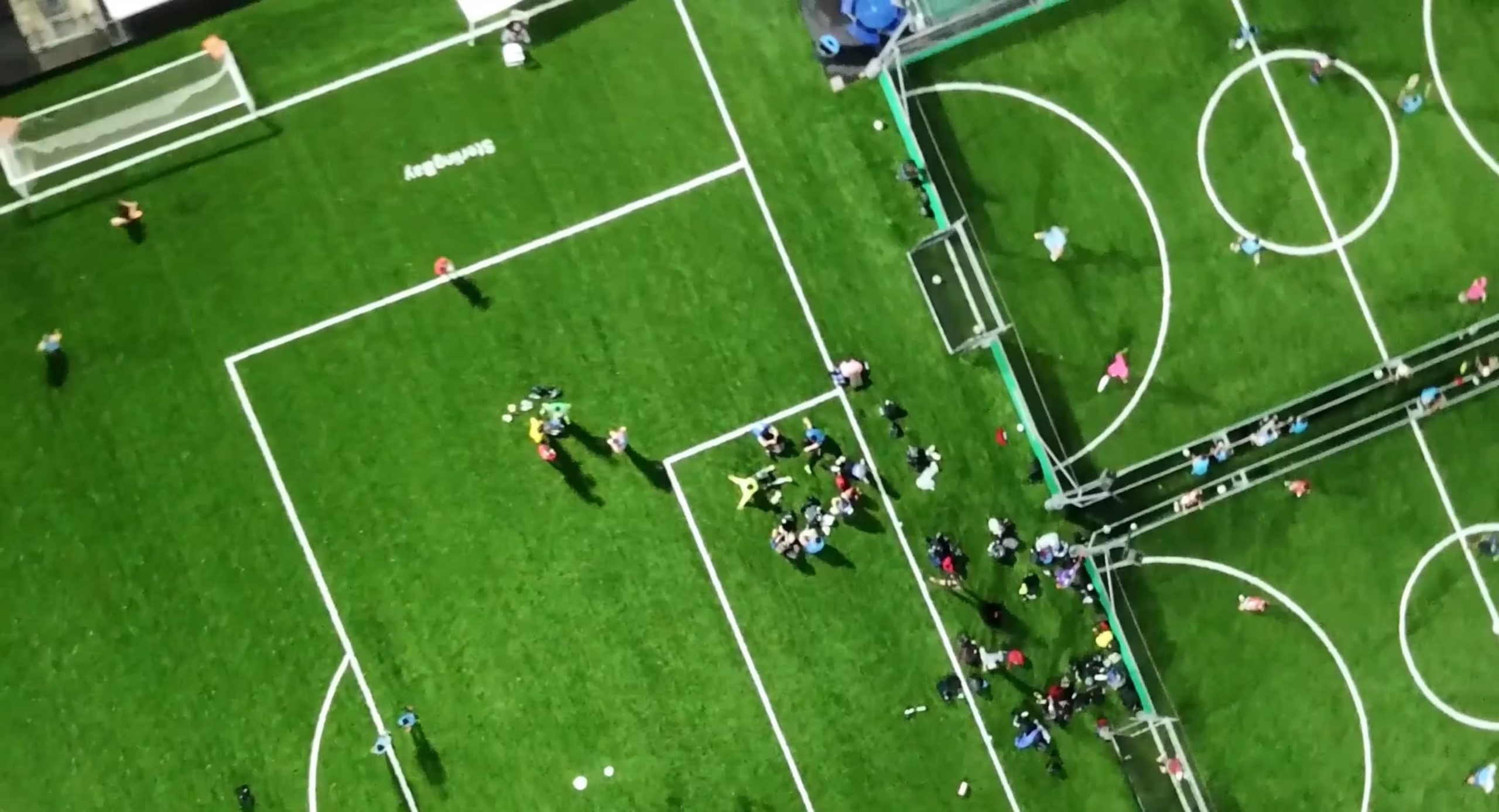 Free from the rules and regulations of standardized sports and true to the essence of how futbol is played around the world, street soccer is a pastime rooted in many Latinos’ childhood memories and, for some, everyday life.

This summer, Mettle Sports, in collaboration with Sterling Bay and the Chicago Park District, is hosting the Chicago Street Soccer Tour, traveling around the city and setting up free, portable soccer fields in select parks. The tour began on July 14 in Ellis Park, with stops scheduled in South Chicago, North Lawndale, and Rogers Park, among others.

Mettle Sports was founded in Evanston in 2017 as a company that provides pitches and equipment to make street soccer more accessible to underserved communities. The company works to promote the culture of street soccer by providing gated areas to practice but allowing participants to organically organize and decide how to play.

“We see it truly as what I think a lot of the world has recognized, that they’ve become these epicenters for communities, a place for people to gather, no matter if you play soccer or just want to commune with your neighbors,” said Mettle Sports CEO Neal Levin, describing the communal aspect of soccer.

Mettle became an ARCS partner with the park district, collaboratively deciding which parks to incorporate into the program based on programming, space, and community, according to Levin. In mid-July, Mettle installed the soccer pitches at Harrison Park for a two-week stint in Pilsen.

“In Pilsen, I think we have a history of being a very strong community,” said 25th Ward Alderman Byron Sigcho-Lopez. “It’s meaningful to be in Harrison Park because I think a good number of our kids, our families, enjoy the game,” he continued, expressing the importance of unstructured activities like this existing in the neighborhood.

Studies suggest that physically active communities are physically and mentally healthier, have higher high school graduation rates, and lower obesity rates, which tends to be a more prevalent issue in communities of color like Pilsen.

One of the goals of the tour is to draw people outside, away from technology, to bond with others.

“The culture of street soccer has been overwhelming to bring people together that otherwise wouldn’t come together in unstructured, free play. That’s just blossomed to finding more ways that we could bring that to the people, and that’s been our mission,” said Levin.

The pitches are open for people to start their own games or even just kick the ball around. Visitors have noticed how this makes the sport more approachable.

“It’s not competitive; it’s more recreational. So there’s a little bit of pressure off of you. You can just show up, play, enjoy the community that we kind of built right now and just have fun,” said local soccer organizer Diego Moreno.

Street soccer has no rules, and that approach to the sport was implemented into the plan of implanting these pitches into the parks. There’s no requirement to book the space ahead of time or to ask for permission to play. The pitches are accessible, unlocked, and remain on-site overnight for the duration that they are in the community.

“What’s nice too is that it’s out here; you don’t necessarily have to ask anyone to use it. You can just come out, be a part of it, and then soccer’s a very welcoming sport,” said Moreno.

It was important to Levin and Mettle Sports to keep the tour free of rules and commitments. He explained that in the United States, most soccer fields are largely built with the intention of programming. He says that Mettle approaches the sport with a conscious effort not to over-structure and give freedom to those who choose to use their amenities, regardless of age, gender, or skill level.

“There’s not a single rule to a street soccer pitch,” he said.

As summer has progressed and the pitches traveled around Chicago, their green walls have filled with the spray-painted names of the neighborhoods they’ve seen, a colorful collage symbolic of the city’s culturally rich neighborhoods. Levin said, “I think people really enjoy creating their own space. I think it’s very empowering to give ownership of how you use an amenity to the community.”

The pitches can currently be found in Field (Eugene) Park in Albany Park. The tour will conclude this fall with a tournament held at Fleet Fields from Oct. 13-16. Mettle Sports says both the Chicago Street Soccer Tour and Cup will return next summer.