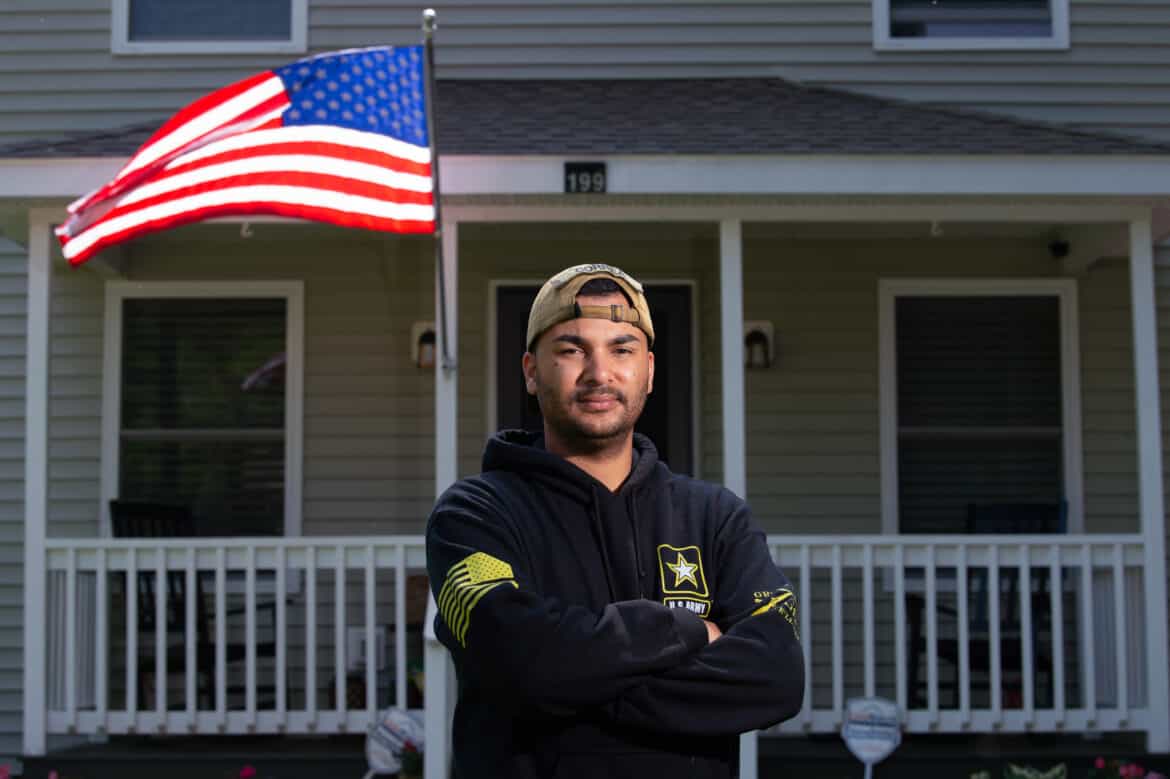 Carlos Correa, Afghanistan veteran at his home in Willimantic, May 26, 2021.

Army veteran Carlos Correa dreams of starting a business growing lettuce and tomatoes in greenhouses. But the traumatic injuries he suffered as a result of serving in Afghanistan prevent him from working. His wife now cares for him at home.

Correa had thought he left Afghanistan unscathed because he was alive and uninjured. But over time, survivor’s guilt, sadness about the problems of veterans he counseled at work, deep-seated anger at an Army superior, and uncontrollable emotions overwhelmed him. He suffers from Traumatic Brain Injury (TBI) and Post Traumatic Stress Disorder (PTSD). His lowest point was the day he set out to kill someone with a gun.

“It was going to end up badly,” said Correa, 34, of Willimantic, a father of two children. But something inside him knew “it’s not me.” He sought help and was immediately hospitalized. He spent nearly three months in residential psychiatric programs, was diagnosed as homicidal and suicidal, and learned that his TBI resulted from trauma his brain suffered during explosive blasts.

President Joe Biden announced in April that American troops would withdraw from Afghanistan by Sept. 11, 2021, 20 years after the attacks on the World Trade Center and Pentagon that prompted America’s longest war.

As the withdrawal nears, Correa and two other Connecticut veterans looked back on the effects their deployments had on their lives. Alyssa Kelleher, 39, director of the University of Connecticut Office of Veterans Affairs and Military Programs, spent 26 months in Afghanistan in two deployments as a combat troop leader. She witnessed the carnage and severe poverty among the Afghan people. Fausto Parra, 38, of Trumbull, who served in Afghanistan and Iraq, said his military units became family. He now works with veterans.

They were among 830,807 American troops who served in Afghanistan, according to U.S. Department of Defense (DOD) statistics. Of those, 2,448 died and 20,722 were wounded, as of June 4. Twenty-five military personnel from Connecticut died in Afghanistan or from injuries sustained there, according to data compiled by the state and veterans’ advocates for memorials in Hartford and Middletown.

The DOD didn’t provide the total number of Connecticut residents who served in Afghanistan, but released statistics of those sent from Connecticut-based units, such as the National Guard, Reserves, and the Groton Naval Base between Oct. 1, 2001, and Sept. 30, 2020, as follows: 2,082 troops, 18 deaths, and 238 injured.

The war has cost the U.S. government $2.26 trillion as of April 15, according to the Costs of War project, based at Brown and Boston universities. The amount doesn’t include costs for Afghanistan veterans’ care or future interest payments on money borrowed to fund the war.

Dr. Sara Rubin, a psychiatrist with the VA Connecticut Healthcare System PTSD/Anxiety Disorders Team, said Afghanistan deployments presented unique challenges to troops because of the country’s rugged terrain, the smaller military units that served there, and fewer resources than Iraq war troops had. She said the result is a sense of isolation, which exacerbates PTSD. She pointed out that TBI, often associated with PTSD, is the “hallmark injury” of the Afghanistan war. She explained the damage occurs in the brain’s frontal lobe, which controls such functions as agitation and rage.

Christina Savage, a VA social worker with the Post 9/11 Case Management Team, said other problems she sees in veterans of recent deployments include muscle pain, substance abuse, unhealthy eating, poor hygiene, destroyed families, and a general struggle to live without the military’s structure.

Correa said most of his problems surfaced when he was counseling veterans. “I was trying to help others. I thought I was doing a good job,” he said. But at night, he lashed out at his wife in unprovoked, angry outbursts.

When he was hospitalized, he talked for the first time about long-held anger. He had unsuccessfully asked for an extension of leave from Afghanistan to help his legally blind wife, who was injured in a car accident. The situation devolved into his superior yelling at him and ordering him to do push-ups, and Correa punching the officer and being demoted, he said. “I felt betrayed,” he said.

Kelleher said her first deployment was extended because the unit that was supposed to replace hers was sent to Iraq instead. “A lot of resources and focus were going to Iraq and not going to Afghanistan,” where conditions for troops were generally “remote and austere,” she said.  And, the harsh existence of the Afghan people, many without plumbing or reliable electricity, “is something that stays with you,” she said.

Now, she puts problems in perspective. “Nearly everything you encounter is not going to be as bad as a bad day there,” she said.

As a female leader, she encountered many Afghan men who wouldn’t speak to her even though she had male Afghan interpreters.

She always knew where her troops were and had immediate access to information. But, back at home, she panicked if she couldn’t reach people. “It took some conscious work on my part” to understand that they were likely not in danger, she said.  Ironically, she recognized her anxiety when training to be a counselor in an Army resilience program and used the curriculum to help herself overcome it.

Kelleher of Willington has a 3-year-old daughter, and, in addition to her UConn job, she is a lieutenant colonel in the Connecticut National Guard. She has ended relationships with people who expressed no interest in her deployments, which she called important parts of her life. But she maintains friendships with about 60 people from her deployments. “Those are the beautiful things about the military—people who you’ve gone through those things with—you stay in touch for life,” she said.

Parra said the people he was deployed with have become family to him. Parra, who left the Army after two deployments, is mourning a fellow soldier who had two additional deployments and died by suicide. Parra linked it to the multiple deployments. “I can imagine,” he said, “that you can transform into someone completely different.”

While earning associate’s, bachelor’s, and master’s degrees, Parra has dedicated his career to veterans, working for the VA, the state Department of Veterans Affairs, the nonprofit Workplace, and now the DOD. “I found no other passion aside from serving veterans,” he said.

End Of The Longest War

Correa expressed doubts about the planned troop withdrawal. The Afghan people “need to be liberated from the Taliban,” he said, adding, “The job is not finished.”

Kelleher took a similar stance. She was an Army platoon leader in her first deployment and a company commander in the Connecticut National Guard in her second. The withdrawal is “hard to see because you were there and believed in what you were doing, and have a lot of personal friends who sacrificed up to their life for this cause,” she said. “There’s still unrest. There’s still violence. There’s still mistreatment of women and minorities. These are things we wanted to help change,” she added.

Parra expressed relief about the pullout, a sentiment shared by the 25 Army veterans from his deployment with whom he keeps in touch. Some have children old enough to serve, and they are pleased their offspring won’t have to go to Afghanistan. He said that since Biden’s announcement, the group has reached out more than usual to check on each other.

Looking back at his deployments where colleagues got injured or died, Correa said, “I didn’t get shot at. I didn’t get blown up. They did. Some people might look at that as a blessing. For me, I should have gotten hurt.”

Cover Photo: Army veteran Carlos Correa of Willimantic spent months in psychiatric hospitals after his deployment to Afghanistan and now with the help of local veterans’ organizations he’s learned to cope with his Traumatic Brain Injury and Post Traumatic Stress Disorder.

All photos by Chloe Poisson