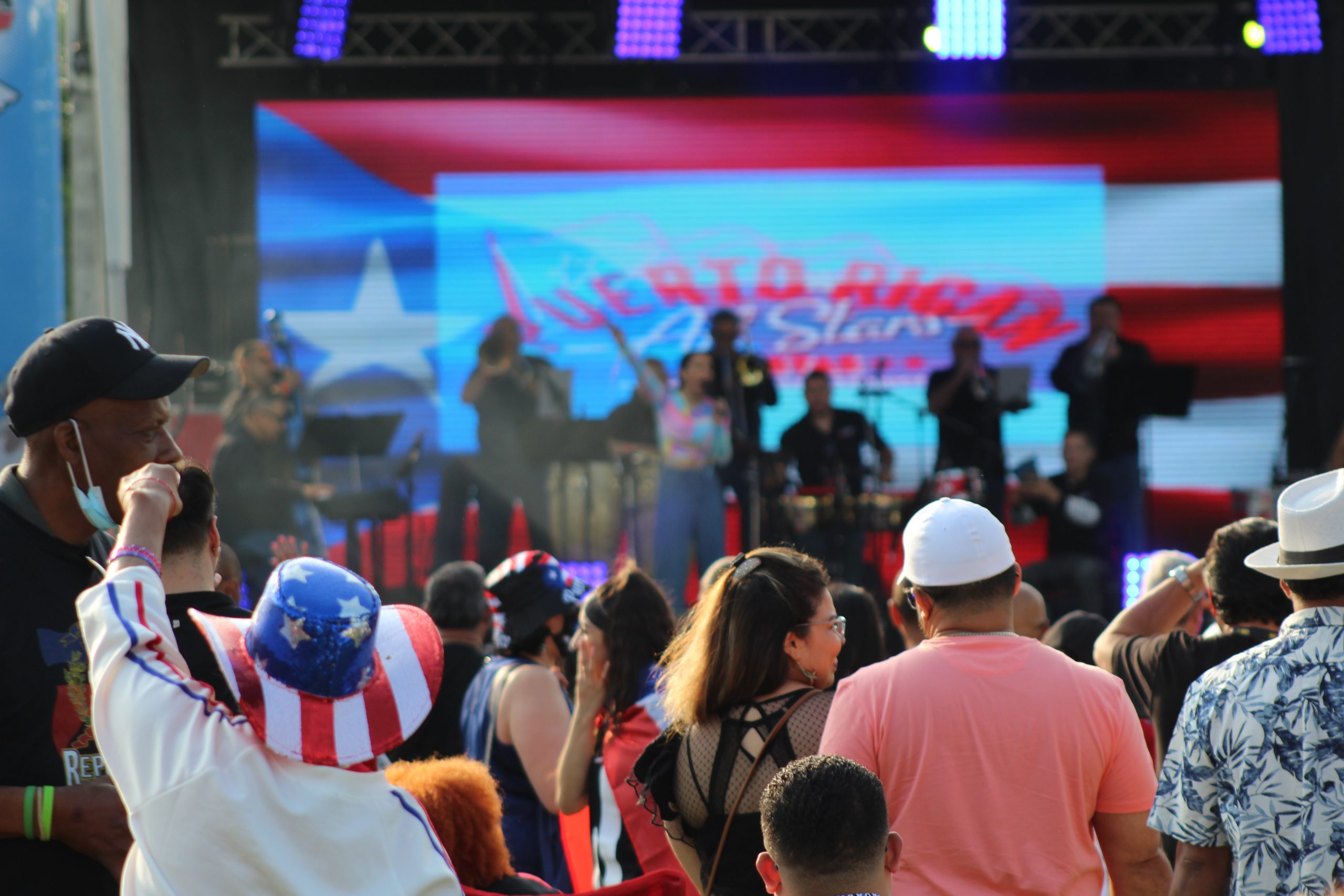 The festival was held Thursday June 9 through Sunday June 12, celebrating Puerto Rican culture and pride in person, without restrictions, after two years of the ongoing pandemic. Puerto Rican Festival committee members said that this year’s ticket prices increased due to budget concerns, costing visitors $10 to enter the festival. In 2018 ticket prices were $2 and in 2019 they were $5 according to a 2021 Paseo Podcast episode, which featured members of the Puerto Rican Festival committee.

Puerto Rican artist, owner of Nola Taíno and DePaul alumna Erica Perez was excited to finally be back and share her culture through her art. She said a lot of her inspiration comes from her Taíno roots— the indigenous people of the Caribbean and Florida who danced bomba.

“Dance and music is what inspires most of my stuff and that’s where I want to continue to lead, ” Perez said.

Her artwork is mostly crafted from reclaimed wood, ranging from wine caddies, earrings, painting cut outs and even propagation tubes made from leftover benches.

The festival is a way for Perez and many other Puerto Ricans to embrace their roots even though they live away from the island.

“I connect a lot to the island every time I go there,” Perez said. “I cry when I leave.”

Despite the distance, solidarity with the island was visible across the park as many wore a black and white version of the Puerto Rican flag, including Perez.

This flag is known as the resistance flag and was a response to the Obama administration passing the Puerto Rico Oversight, Management, and Economic Stability Act (PROMESA) in 2016, which gave the United States financial control over Puerto Rico according to USA Today. Critics such as Bernie Sanders viewed this decision as an act of colonialism because PROMESA’s board was composed of people who did not live nor were elected in Puerto Rico.

The flag is now often used as a symbol of resistance and grief according to USA Today.

“The black Puerto Rican flag is a representation of resistance of the political people on the island,” Perez said. “It unites us here you know, we’re so far away and so I feel like anytime I see someone wearing it here, like no, I’m with my people.”

Angelica Torres chopped up bits of ice and pieces of pineapple in a blender to serve guests fresh piña colada drinks. For her the festival is a way to not only celebrate her culture but also earn some money.

Torres has been coming to the festival for around eight years now and after not attending for two years, she said being back felt “amazing.”

While she multitasked between taking orders and making drinks, Torres reflected on her Puerto Rican heritage.

“We have a great culture, great food, great drinks, and an amazing island,” she said.

The festival encapsulated more than art and delicious drinks; it was also a place where medical clinics like CALOR could educate the Humboldt Park community about STIs. CALOR provided free HIV testing at the festival.

CALOR program manager Alfredo Flores said it felt appropriate to attend the festival because organizations like CALOR are not typically present at events like these.

“It’s a way to access individuals,” Flores said. “It’s really important to also help educate individuals at festivals who might not know their status and want to know about HIV.”

Flores said they were able to test over 300 people during the festival’s four day celebrations. This was a “big first” according to Flores because of the high stigma around HIV.

For CALOR, part of destigmatizing HIV in the Latinx community is creating a welcoming environment. Their tent was surrounded by pride flags and representatives dancing to reggaeton music.

Flores said that people often approach the CALOR tent quietly, but once they enter their space and see them dancing, “they’re like, ‘oh my god,’ that’s my people.”

Festival attendees like Noelani Sanchez said she felt safe at this year’s event despite the neighborhood’s struggle with gun violence in previous years. There were nine homicides and 29 shootings in the 26th Ward in August 2021 according to Block Club’s analysis on Chicago Police Department data.

“I personally have never felt unsafe,” Sanchez said. “I always feel pretty secure, everyone is friendly and just happy to be there. I haven’t had a bad experience myself.”

In a 2021 Paseo Podcast episode, Executive Director of the Puerto Rican Festival Carlos Jiménes Flores said that the reason for the ticket price uptick was due to budget issues.

Flores said that he and the other committee members have a lot of ideas they wish to implement but they struggle to do so because of lack of money.

“I know that people are gonna feel some type of way with us charging at the gate, but there is no other way to raise money for next year,” Flores said in 2021.

Flores explained that the ticket funds collected at the door will be reinvested into the Humboldt Park community.

“The money that we get not only are web generating resources and connecting the community with so many different outlets for positivity so we can impact the negativity that’s going on in our neighborhoods,” Flores said in 2021. “That’s the only way to battle the violence and the poverty and the lack of education.”

The Agenda of Chicago and the Puerto Rican Festival of Chicago did not respond to comments about safety and ticket prices in time for publication.

Hundreds of people attended the festival over the weekend. Although the festival was open to everyone, Puerto Rican traditions were at the center. People were able to learn about the culture up close through the fresh food, live music and authentic vendors.

Perez said that they hope attendees leave the festival with a newfound appreciation for Puerto Rico.

“I hope that they’re inspired to try new things and go different ways and also respect their culture as well,” Perez said.

Nadia Hernandez is an undergrad junior at DePaul University studying journalism. She is currently the print managing editor at The DePaulia and President of National Association of Hispanic Journalists DePaul chapter. Twitter @naddivz

Jacqueline Cardenas is an undergrad junior majoring in journalism with a concentration in Latino Communication at DePaul University. She is the editor-in-chief of La DePaulia. She is a first-generation Mexican-American student and aspires to diversify the news industry. She loves nature and reading in her spare time. Twitter: @jackiecardenas_