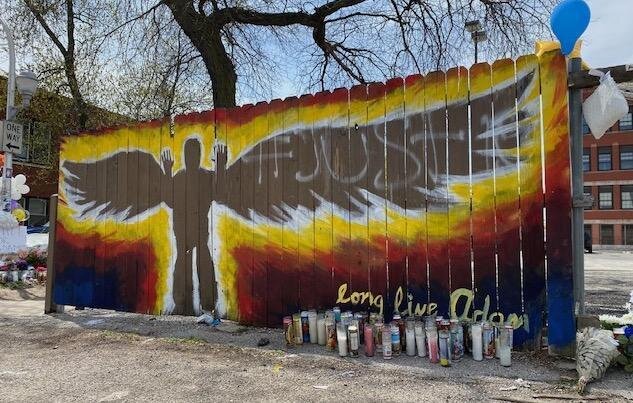 Over the last two weeks a steady stream of visitors has flowed into an alley in “La Villita,” as the Chicago neighborhood of Little Village is affectionately known by its mostly Mexican and  Mexican-American residents. The somber parade of neighbors and friends has come to see the site of the final moments of Adam Toledo’s short life.

Many of the mourners at the makeshift memorial are parents with their children. They’re paying respects, leaving candles, flowers, and notes at the very spot where the 13-year old died.

They’re praying at the mural, a cutout of Adam with his hands up and angel wings, memorializing the instant he was shot and killed by a Chicago police officer.

Their eyes are fixed on the mural and makeshift altars. They’re lost in thought over the tragedy that happened there, and the violence that many of them know all too well.

“I don’t want my son growing up here,” said Erica Sanchez as she held her 3-year-old son. Sanchez was born and raised in Little Village and graduated from the high school near the scene of the shooting.

She, like other visitors in the alley, were compelled to come by after seeing the video of the police shooting. “It was shocking”, Sanchez said. “It reminded me a lot of friends who have died because of violence.”

Dulce Canada became emotional as she described how she felt after watching the video. “Police acted too fast, too soon,” she said in Spanish.

It’s a sentiment that 15-year old Alan shares. “They’re supposed to protect us,” he said of the police, in Spanish, as he studied the mural. His mother,  Delia Roman stood at his side.

A HISTORY OF RACIAL ABUSE

The release of Officer Eric Stillman’s body camera footage set off a fresh round of angry protests against the Chicago Police Department for what demonstrators said is a history of racial abuse.

The shaky video of the fatal encounter on March 29 shows Stillman chasing Adam Toledo down a dark alleyway. The officer screams “Stop right now!” He then shouts, “Hands. Show me your hands. Drop it. Drop it.” As Adam turns and lifts his hands, a single shot is fired and he collapses to the ground.

Thousands gathered on a recent night in Chicago’s Logan Square, carrying signs, many reading, “Justice For Adam.” People chanted, “From the West side to the South – CPD, We want you out!” and “Hands up, don’t shoot!” reminiscent of protests last summer, after the killing of George Floyd in Minneapolis.

“So if you put your hands up, they shoot. If you put your hands down, they shoot,” state Rep. Edgar Gonzalez recently said from the floor of the Illinois House. “If you walk, you run, you hide, you sleep, you do exactly as they say, they still shoot – What the hell are we supposed to do?” Gonzalez’s district includes the block where the shooting happened.

“Police kill Hispanics-Latinos at a rate six times higher than white people,” said González Van Cleve in an interview  with NBC News. He is the author of “Crook County: Racism and Injustice in America’s Largest Criminal Court,” which delves into racial bias in Chicago’s legal system.

A practice of abuse favoring the safety of police over the public has festered mistrust among Hispanic-Latino residents like Erica Sanchez. “Police only use the power of their guns in solving problems,” she said, describing a severed relationship with law enforcement. “People don’t want to call 911 because they don’t get the help they need from the police.”

Adam Toledo’s brief life and violent death is a reflection of a reality experienced by too many Black and Brown youth in Chicago.

Chicago police statistics reveal the first three months of 2021 have so far been the deadliest in the city in four years.

131 slayings were recorded, a 34% increase over the same period last year. The number of total shooting victims, including those killed by gunfire, also saw a spike of 706 — a 43% increase.

Neighborhoods on the South and West side, already hurting from poverty and disinvestment, historically see the most violence.

“I feel insecure,” said Alan, the teenager at the mural, recalling another shooting that happened right outside his home. “Gangs are everywhere.”

“I tell my daughter to pull back her hoodie whenever we are driving,” Canada added, looking toward her teenage daughter, Valeria. “I am afraid she will be mistaken for a gang member and be a target.”

Chicago Police records show as many as 70 active and inactive gangs in the city, although critics question the validity of the information that lists about 135,000 Chicagoans as members.

Sanchez said she’s had a gun aimed at her head. Adam’s case, she added, is symptomatic ok of a larger problem. “People ask where were the parents? Why was he out in the middle of the night? Why did he have a gun?” She said the question should be: what type of environment makes children vulnerable?

“If you weren’t raised in this neighborhood, then you don’t understand the needs,” Sanchez said, taking a critical shot at the kind of victim-blaming that often accompanies a controversial police shooting. “Adam might not have been perfect, but there was no need for him to die that way.”

The perception that victims are somehow responsible for their own shootings is central to a prejudiced culture of violence that strips authority of any accountability.

A Cook County prosecutor who accused Adam of having a gun in his hand when he was shot is now under investigation.

“An attorney in our office failed to fully present the facts surrounding the death of a 13-year-old boy,” Cook County State’s Attorney Kim Foxx spokeswoman Sarah Sinovic said in a statement. “The video speaks for itself.” The prosecutor has been put on leave.

Official misinformation is not an aberration, but more damning evidence of a contaminated, self-serving system often proliferated by a homogenous media more concerned with offending the privileged than fair and accurate reporting.

CHANGING THE RULES OF ENGAGEMENT

The conviction of former Minneapolis police officer Derek Chauvin in the death of George Floyd was met in Chicago with more relief than cheers as memories of a violent summer remain vivid and fresh.

“This verdict marks an important milestone on the journey to justice, but the fullest measure of progress is how we deliver accountability, safety and meaningful change,” Illinois Gov. J.B. Pritzker said in a statement.

“George Floyd’s death sparked a pivotal moment for Americans fighting to end systemic racism. Today marks a moment where future generations can look back and see that we as a nation came together and rightfully demanded justice and accountability,” said Chicago Mayor Lori Lightfoot.

These official remarks, as uplifting as they are, must be measured against the actions of political and community leaders who’ve vowed to change a system that did little for Adam Toledo.

Severe criticism of the Chicago Police Department prompted Mayor Lightfoot to once again ask that the department create a better policy for foot chases she said too often prove dangerous to suspects, the police, and the public. “I refuse to treat this as just business as usual,” Lightfoot said.

In a statement, Representative Jesús “Chuy” García, D-Ill., a resident of Little Village said, “Whatever the circumstance, we must never normalize the shooting of a child by police. We failed Adam, as we have failed so many other young people in our country.”

Adam’s killing has enkindled movements against racial injustice and excessive use of force by police. Traditional policing often escalates tense situations, leaving people of color vulnerable to violence because of systemic racism.

“He had his hands up,” said Alan, the teenager, pointing out that Adam Toledo was surrendering to Officer Stillman. “Police often make matters worse.”

Stillman’s aggressive approach put him in a vulnerable position. He was running alone in a dark alley at night with poor visibility and cover. Reform advocates say de-escalation tactics must be adopted to minimize violence to police and suspects. Under such policies, Adam might not have been pursued.

There is also a history of distrust of police in communities of color, like Little Village, due to the disproportionate number of arrests, greater jail time, and violence.

“Police need better training to deal with Hispanic and Black communities,” Sanchez said. She blamed a lack of cultural competency.

Language and cultural barriers can also widen the divide between law enforcement and the public they serve. But having a diverse police force that reflects the community might not be enough for critics who contend officers should live where they work as a way of having skin in the game.

“I think law enforcement is a world apart from the needs of every community of color,” said Katya Nuques, executive director of Enlaces Chicago – a community organization in Little Village that focuses on violence prevention. “Unfortunately, I think cops in this country are trained to serve in white and affluent neighborhoods, not in communities of color. The disconnection is abysmal, and therefore we need decades of training and a whole generation of police officers who enter the force under different policies, training, and practices before we see a fundamental difference.”

A statement on the Adam Toledo shooting, from the Illinois Latino Agenda put it bluntly: “We also must commit to substantive, sustained investments in Brown and Black communities. Let’s put a laser focus on creating real futures for young Brown and Black boys.”.

The group, a coalition of Hispanic-Latino leaders, said reform must include economic empowerment. “While we proactively work to eradicate racist policing, we as a society need to apply the same force to expanding opportunities for young men of color to excel in school, the professional world, and life.”

These are basic resources that fearful residents of La Villita insist their children need in order to escape the violence gripping their neighborhood.

Publisher’s Notes: A version of this essay was first published in the Chicago Reporter. 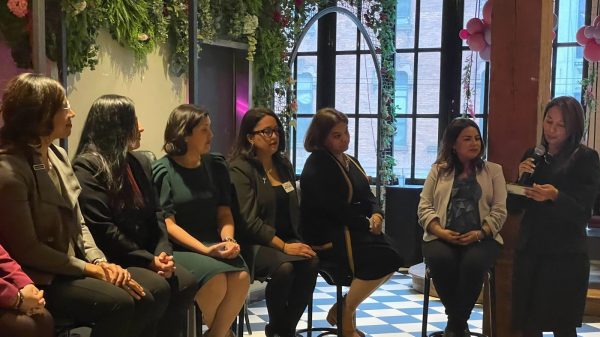 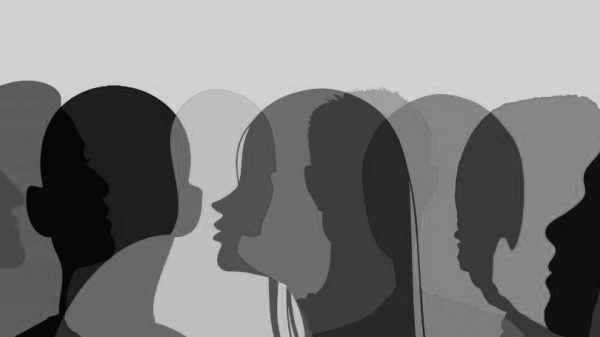 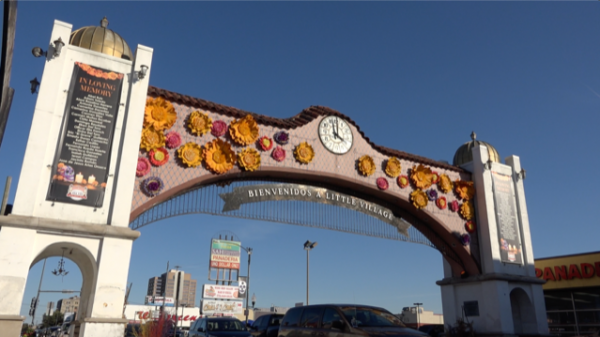